SuMo-Rhine Online workshop: “Municipal perspectives: for the promotion of sustainable mobility in the Upper Rhine Region”

On the 7th of December 2020, the SuMo-Rhine project team organised another online workshop on municipal perspectives on the initiative of Dr Eckhard Szimba (KIT-ECON), Dr Kira Schumacher and Nora Baumgartner (both, KIT-DFIU). The workshop focused on sustainable urban mobility and mobility concepts. More

RES-TMO Mid-term Colloquium: Renewable Energy and the Challenges for a Decarbonized Energy System

On December 1, 2020, the preliminary results of the project's six work packages were presented at a mid-term colloquium. The conference took place online and was attended by around sixty participants from science, business, politics and civil society. It was organized by the project coordination office together with the Upper Rhine trinational energy and climate network, TRION-climate e.V. The keynote speaker was Mr. Georges Walter, Director of Environment at the Conseil Départemental du Haut-Rhin, France. More

On November 10, 2020, the third cross-border workshop in the framework of the RES-TMO project was held online. 26 regional energy stakeholders from France, Germany, and Switzerland exchanged their perspectives and knowledge on the topic of regional energy resilience and decarbonization through decentralized renewable energy (RE). More

On October 7, 2020, the second cross-border workshop of the project was held online with key regional stakeholders. 30 French, German and Swiss participants exchanged on the topic of governance and regulatory issues related to individual and collective energy self-consumption, while reflecting on the perspectives of improving the status of prosumers in the light of the EU Clean Energy Package. More

Collaborate and research despite the current circumstances. Keeping this idea in mind, the SuMo-Rhine project team hosted the first interactive online workshop titeld “Municipal perspectives: which indicators do we need for sustainable mobility?” on the 23rd of June. The workshop was conducted in French and aimed especially at French municipalities. The SuMo-Rhine team welcomed 10 participants from both side of the Rhine.

The RES-TMO project celebrated its official opening on 3 December 2019 in the Aula of the University of Freiburg with welcoming speeches by Rector Prof. Hans-Jochen Schiewer and Ms. Bärbel Schäfer from the Freiburg Regional Council as well as numerous expert presentations. The opening event was organized by the project coordination office of the University of Freiburg together with the trinational network of energy and climate actors in the Upper Rhine, TRION-climate e.V. Ms Vulla Parasote, managing director of TRION-climate, and Ms Ines Gavrilut, project coordinator, moderated the event. Over 130 representatives from science, politics, industry and civil society attended the event.

On 13.11.19 the first participative workshop “Communal Perspectives” for the promotion of sustainable mobility in the Upper Rhine region took place in Freiburg. The workshop was aimed at urban and transport planners, sustainability and climate representatives as well as decision-makers and experts at local level from Baden-Württemberg and Rhineland-Palatinate.

On 23 September 2019, the first cross-border stakeholder workshop was held in Strasbourg. It was focused on citizen-driven cooperative initiatives on energy. The 28 French, German and Swiss participants in this interactive workshop were mainly representatives of citizen energy initiatives and they had productive exchanges on citizen energy, exploring the regulatory, financial, institutional and operational challenges of citizen-based cooperative initiatives on clean energy in the three national contexts, while also reflecting on opportunities offered by cross-border cooperation. More

Scientific Kick-Off of the SMI Project

On October 10, 2019, the partners of the SMI – Smart Meter Inclusif project met on the Illberg Campus of the Université de Haute-Alsace in Mulhouse for the Scientific Kick-Off. During this day, the different participants were able to exchange on the ins and outs of the project. Each of the project partners presented the tasks for which they are responsible. These presentations were followed by a time of direct exchange with the various parties present. This was an opportunity to form links between each other’s fields of activity and research. These links are essential in order to ensure quality collaborative work on this project. More

Within the scope of the Transfer Workshop of Axe V, NovaTris, the center for cross-border competencies of the Université de Haute-Alsace, organized a panel discussion on "Intercultural dialogue: shaping sustainable and innovative technologies", in which researchers and stakeholders from the socio-economic world exchanged views. The event, which was rounded off with a buffet, took place on November 29, 2018 in Mulhouse.

The Upper Rhine Cluster for Sustainability Research organized the International Sustainability Conference on 27 and 28 September 2018 in Strasbourg as a showcase of research activities in the field of sustainability research in the Upper Rhine region. Each of the two days there were about 200 guests in the Palais Universitaire in Strasbourg and heard next to the three internationally known keynote speakers Janet Hering (EAWAG), Benjamin Sovacool (University of Sussex) and Alexandra-Maria Klein (University of Freiburg) also 27 presentations in the topics of governance & multiculturalism, energy, and transformation & resources of researchers from the cluster and beyond.

In addition, the words of Hans-Jochen Schiewer (President of EUCOR - The European Campus), Jay Rowell (Vice President Research of the University of Strasbourg) and Francoise Bey (Vice President of the Eurometropole Strasbourg) paid particular attention to the achievements and prospects of the cluster political-administrative perspective. The President of EUCOR, for example, emphasized the importance of the cluster for the future development of the joint research area of ​​the Upper Rhine region and confirmed  the researchers a very good visibility of their activities in the last three years.

The conference was a great success and, in addition to the active researchers, we especially thank the organizing team from Strasbourg. 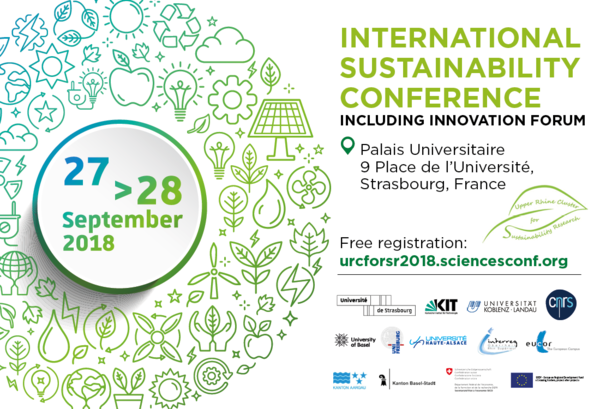 Building on the success of the previous year, the participating sites of the cluster have organized again various events of a lecture series on the core topics of the cluster:

Transfer-Workshop "Challenges of the water-energy-food nexus"

Trinational Workshop of the Axis II

The Trinational Workshop of the Axis II which took place in Karlsruhe on 17 September 2018, was addressed to all Axis II researchers. Three speakers gave insights into their research on "Sustainable Cities". In addition, the individual working groups of the Axis II presented the status of their research.

The Transfer Workshop "First Tri-National Start-Up Boot Camp" took place on June 12, 2018 in the Faculty of Environment and Natural Resources.

This event, organized by the Axis IV, was all about start-ups from Germany, France and Switzerland. Among the 32 participants were established start-ups as well as persons interested in starting a business. In addition to participants from France, Germany and Switzerland, a business delegation from Central America participated in the meeting. Several speakers from Basel, Strasbourg, Freiburg and Karlsruhe informed about the Upper Rhine start-up scene and gave helpful information for founders and all those who aim to found a business. The event was completed by an inspirational lecture by Hendrik Klosterkemper, CEO of the successful Freiburg start-up Enit Systems.

A full-day workshop on "Sustainability governance in multicultural settings" was held by Axis I "Governance" on
15 January 2018 at the University of Strasbourg. The goal was to bring together all researchers involved in the humanities and social sciences of the cluster, and to see how their cooperation and exchange can be concretized aiming at publishing a common textbook.

Subsequently, interested researchers were invited to attend a Transfer Workshop on "Governance for sustainability in European cities", with Dr Cristina Garzillo, Senior Coordinator within the "Governance and Social Innovation" group at the ICLEI (International Council for Local Environmental Initiatives).

The Axis III "Transformation processes & technologies" invited all interested persons to the transfer workshop on “Air pollution, techniques and remediation strategies” (in French) with the participation of researchers, associations, companies and other stakeholders. The event took place in Strasbourg in the afternoon of January 9, 2018.

Together with the German Environment Agency and the Permanent Secretariat of the Alpine Convention we organized a Transfer Workshop which focused on "Eco-Innovation supporting a Green Economy in the Alpine region". The event took place on 13 November 2017 at the University of Basel.

The press reported detailed on the contents of the transfer workshop:

All interested persons were warmly invited to join the Transfer Workshop held by Axis IV (Resource Management) with a focus on Innovative Agricultural Systems, which took place on 4 October 2017 in Freiburg. The aim of this workshop was to bring together researchers, experts, and practitioners to exchange knowledge and to facilitate its transfer into politics, industry and society.

On 29 September 2017 the Cluster organized a full-day follow-up of the kick-off workshop. All the researchers involved in the cluster were invited to participate.

The event took place in the Herder-Building, Tennenbacher Str. 4 in 79401 Freiburg.

On 15 September 2017 a Transfer Workshop on "electromobility" took place in Karlsruhe. The aim of the workshop was an intensive exchange between research and industry on this topic. Interesting lectures highlighted the topic of "electromobility" from different perspectives.

Large Workshops of the Theme Axes

Each of the five theme axes of the cluster organized a large workshop in 2017:

In 2017, the cluster's participating sites organized various events of a whole lecture series
on the core themes of the cluster.

Information on the events is given below: 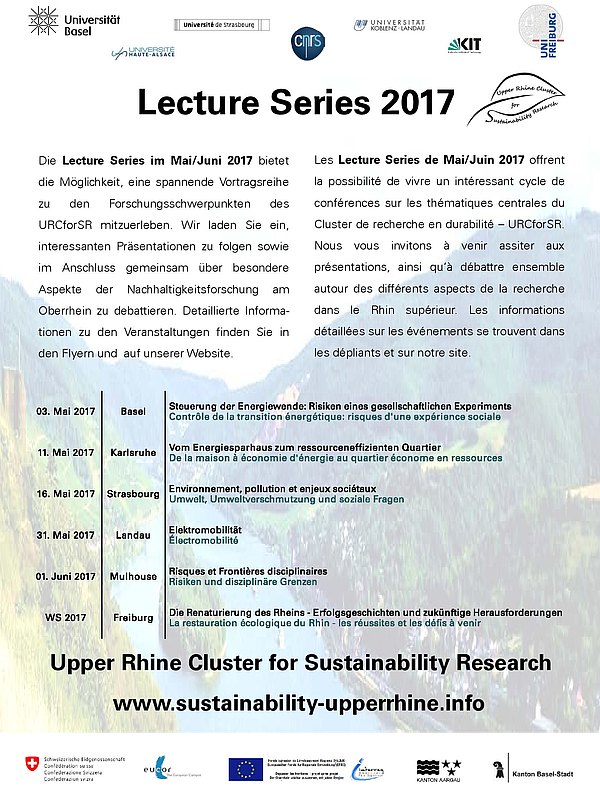